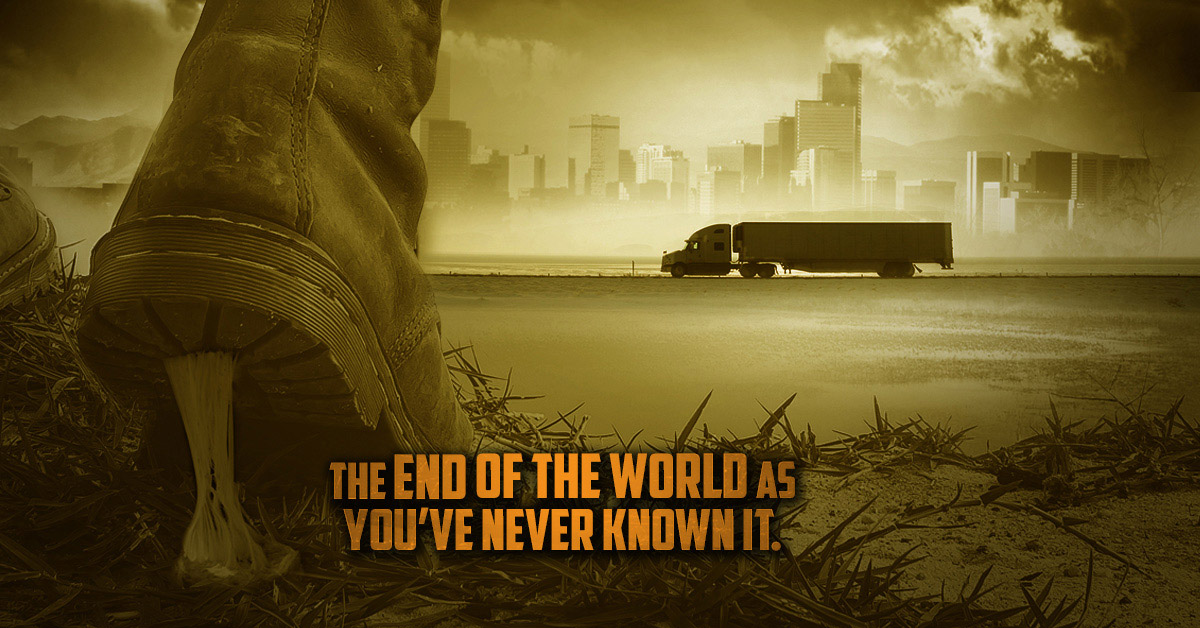 Mutants, cannibals, super smart bears. The wasteland is filled with dangerous creatures and bizarre characters trying to survive. In the middle of it all, a man and his dog roam what’s left of the world doing their best to help the helpless. It’s the end of the world as you’ve never known it. 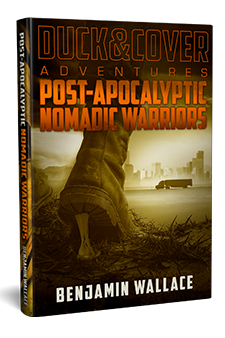 The post-apocalyptic world isn’t that bad.

Sure, there are mutants. But, for the people of New Hope, daily life isn’t so much a struggle of finding food or medicine as it is trying to find a new shortstop for their kickball team.

This makes it difficult for a post-apocalyptic warrior to find work. Thankfully, an army full of killers is making its way to the peaceful town and plans to raze it to the ground. Only a fully trained post-apocalyptic nomadic warrior can stop them.

Two have offered their services. One is invited to help. The other is sent to roam the wasteland. Did the townspeople make the right decision? Will they be saved? Did they find a shortstop? What’s with all the bears?

Find out in Post-Apocalyptic Nomadic Warriors,a fast-paced action adventure novel set in a horrific future that doesn’t take itself too seriously. 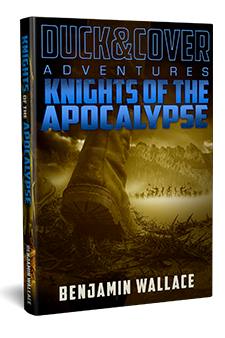 Knights of the Apocalypse (Book 2)

They’ve got bounty hunters on their trail, a kingdom against them and no one they can trust. It’s the end of the world as you’ve never known it.

A price on their heads has driven Jerry, the post-apocalyptic nomadic warrior, Erica and their loyal mastiff west in search of a new beginning. But when their truck breaks down in what was once southern Colorado they are swept into an epic quest at the behest of King Elias, ruler of the Kingdom of the Five Peaks.

On their quest they will meet old friends and new foes, mutant cannibals, savage mountain men, fearsome knights and much, much more.

Powered by gold and driven by steam, the kingdom has risen from the ashes of the apocalypse into a realm of prosperity and relative peace. The king has offered them a new start within the walls of the kingdom. But is the prize worth it?

The adventure that began in the best-selling novel, Post-Apocalyptic Nomadic Warriors, continues here in Knights of the Apocalypse. Read it today.

Knights of the Apocalypse - Audio Sample 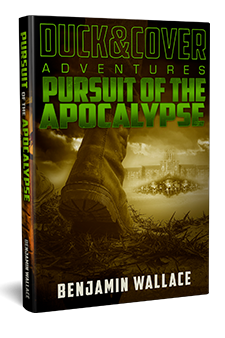 Pursuit of the Apocalypse (Book 3)

There’s a bounty hunter to catch, an army to shake and a biker gang full of dentists hot on his tail. It’s the end of the world as you’ve never known it.

The bounty hunter Mr. Christopher has kidnapped Erica and The Librarian and his dog, Chewy are desperate to get her back.

Willie and Coy like money and they are after The Librarian to collect the price on his head. Hawk and his gang of wasteland raiders are after Willie and Coy for a breach of contact.

In the powerful city of Alasis, a movement is growing and the people consider The Librarian a hero. Lord Invictus wants the movement stopped and has sent the fearsome and mysterious Skinners to finish what Mr. Christopher started.

In the middle of it all is a city where the citizens prize freedom and equality above all other things, or else.

And, of course, there are bears.

Be a part of the greatest chase the apocalypse has ever known in this exciting sequel to the best-selling Post-Apocalyptic Nomadic Warriors and Knights of the Apocalypse.

Pursuit of the Apocalypse - Audio Sample 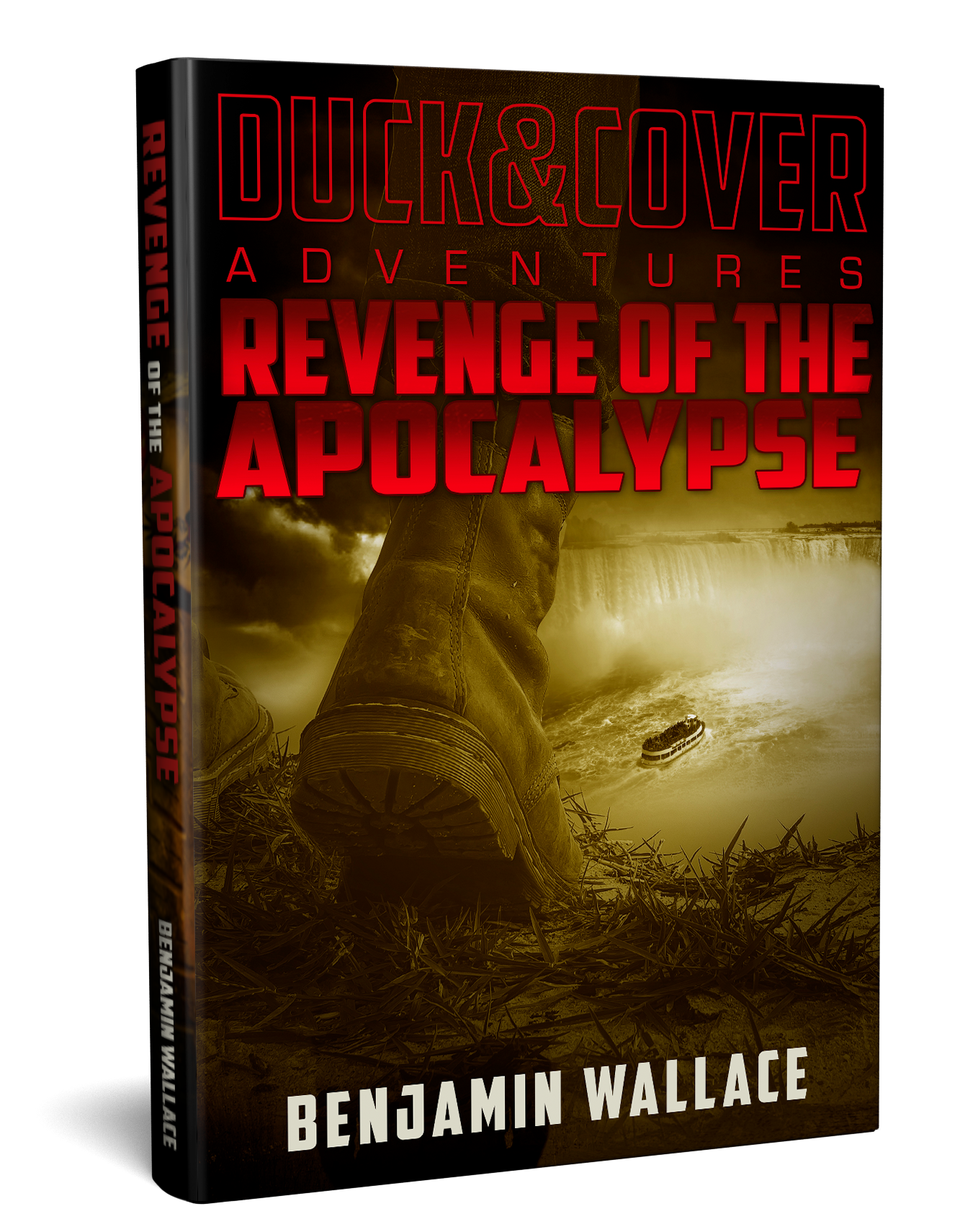 Revenge of the Apocalypse (Book 4)

There’s an empire to topple, a tyrant to kill and revenge to be had.

They’ve taken everything from him. Now Jerry and Chewy are headed to Niagara Falls to take out the wasteland’s greatest villain once and for all. But the Librarian isn’t the only one looking for revenge.

Several other post-apocalyptic nomadic warriors have experienced Invcitus’ horrors first-hand and are in town to find vengeance. The Bookkeepers have lived under the tyrant’s iron fist for far too long. They’re well informed, organized and ready to strike.

Mr. Christopher is heading back to town with one less hand and a whole new reason to kill The Librarian. Coy has been beaten, battered and forced to eat his friend as bacon. And, now he’s looking to settle the score.

But, Invictus didn’t get to the top of the post-apocalyptic pecking order by being easy to kill. Catch all the revenge, retribution and comeuppance the wasteland has to offer in Revenge of the Apocalypse, book 4 in the Duck & Cover Adventures.

It’s the end of the world as you’ve never known it.

Revenge of the Apocalypse - Audio Sample 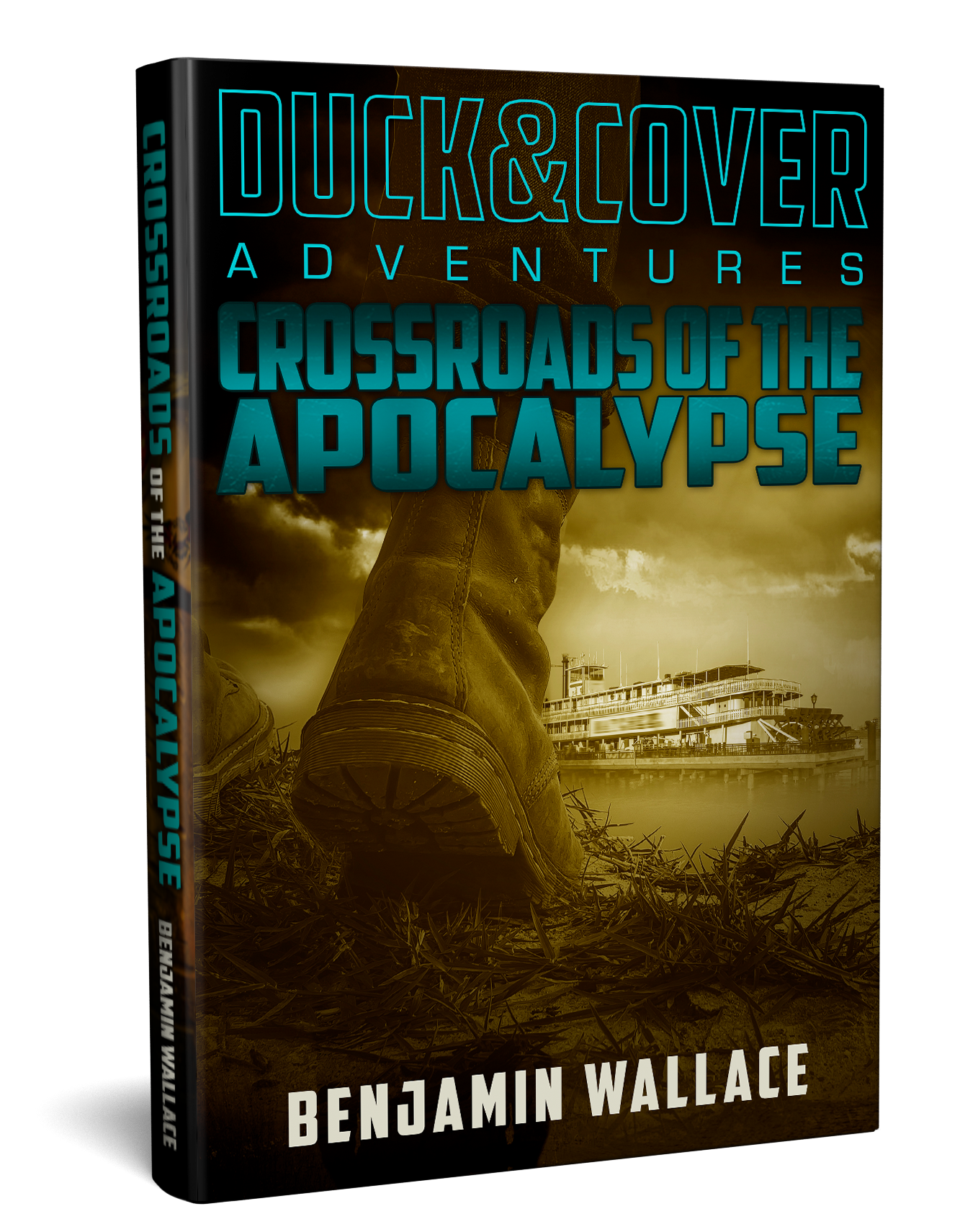 Crossroads of the Apocalypse (Book5)

He’s got pirates behind him, sea monsters ahead of him and a boatload of passengers that refuse to get along.

It’s been a year since the events in Niagara Falls. Things have generally gotten better in the wasteland and civilization is starting to take hold along the rivers. No one knows where the Librarian is, or if he’s alive, but there’s a man and a mastiff running passengers from Hannibal to Cairo that might have an idea as to what really happened.

Life is starting to return to normal along the river if you don’t count the pirates and the sea monsters.

But all of the is about to change and the end of the world may never be the same again.

The Duck and Cover Adventures continue in Book 5, Crossroads of the Apocalypse.

It’s still the end of the world as you’ve never known it.

Crossroads of the Apocalypse - Audio Sample 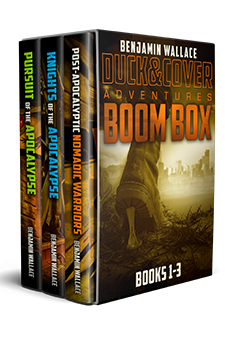 It’s the end of the world as you’ve never known it.

Join the Librarian as he does his best to make the post-apocalyptic world a better place by protecting the weak, fighting injustice, squaring off against a group of former renaissance fair workers who have established a kingdom in the Rocky Mountains, etc… Can one man make a difference in the face of such murderous cannibals and super smart bears? Probably not.

Post-Apocalyptic Nomadic Warriors (Book 1)
An army of savage raiders have their sights set on the town of New Hope and the people there need help. So, when two heroes offer their assistance, one is invited to stay and the other is sent back into the wasteland. Did they choose the right man for the job? Find out in Post-Apocalyptic Nomadic Warriors.

Knights of the Apocalypse (Book 2)
A price on their heads has driven the post-apocalyptic nomadic warrior, Erica and their loyal mastiff west in search of a new beginning. But when their truck breaks down in what was once southern Colorado they are swept into an epic quest at the behest of King Elias, ruler of the Kingdom of the Five Peaks. The adventure that began in Post-Apocalyptic Nomadic Warriors continues here in Knights of the Apocalypse.

Pursuit of the Apocalypse (Book 3)
A bounty hunter has kidnapped Erica and The Librarian and his dog, Chewy, are desperate to get her back. The chase will take them from the deserts of west Texas to the town of Tolerance and beyond. Be a part of the greatest chase the apocalypse has ever known in this exciting sequel to Post-Apocalyptic Nomadic Warriors and Knights of the Apocalypse. 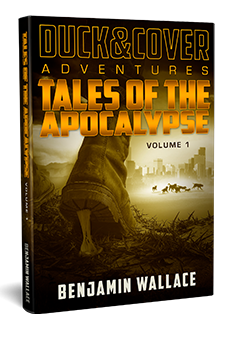 Tales of the Apocalypse Vol. 1

The end of the world as you’ve never known it.

From the pages of the best-selling Duck & Cover Adventures comes thirteen stories of those who survived the apocalypse. Some would go on to be heroes, others villains, some were dogs and will stay dogs, but they all must contend with the horrors of the new world and find a way to survive in the wasteland that was America.

GONE TO THE DOGS
Fidget and Sasquatch were loyal companions to the end. Now that the end has arrived, they must say goodbye to the only home they’ve ever known. If they can figure out how to open the door.

BUNKED UP
They took refuge in a homemade bomb shelter when the end of the world began. There they were safe from the bombs and the fallout. But they were never safe from each other.

PACK HUNTERS
Fidget and Sasquatch are on their own, a situation neither of them are really comfortable with. They decide to join a pack for safety, for food and for friends. Now all they have to do is find one.

ANIMAL’S CALLING
Before the world ended, Jackson drifted from job to job, never settling on anything that could be called a career path. But with the new world comes new opportunities. This is what he was born to do.

LAST BAND OF THE APOCALYPSE
Caught between county fair gigs during the apocalypse, the members of a cover band find themselves the last band left in the world. Getting gigs should be easy. Should be.

PRISONER’S DILEMMA
The Librarian has seen his fair share of “wasteland justice.” Now he’s chained to the floor of a grocery store with a man he must face in court. In a battle to the death. Naturally.

ALPHA DOG
Sergeant Satan was genetically enhanced to be the world’s best military scout. He was designed to be smarter, faster and more than a match for any dog this side of the apocalypse. Of course, his creators had never met Fidget.

WILLIE AND COY RIDE AGAIN
Willie and Coy aren’t the brightest. Or the best looking. Or very likeable. No one would ever accuse them of being hard workers. But the pair have found a way to make an honest living in the apocalypse. If they can get enough people to watch.

IN A PERSON PACK
Tired of looking for a pack to join, Sasquatch and Fidget reminisce about the joys and delights of life in a people pack.

NO QUARTER
Deep in the swamp of New Orleans awaits a terror many refuse to believe exists. It’s a monster of myth and rumor so horrible that it could not possibly be real. On the trail of a kidnapped woman, The Librarian must seek out and confront this monster of myth.

EVE OF THE APOCALYPSE
Man is the true monster. Unless there is a man who is a monster that also makes monsters. Then he’s the truest monster and only a post-apocalyptic nomadic warrior can bring this monster’s monster-making to an end.

Get this laugh-out-loud collection of stories from the Duck & Cover Adventures post-apocalyptic series now.

Tales of the Apocalypse - Audio Sample