How To Shave A Gremlin

Whether you’ve been able to catch the show or not, I’m sure you’ve been unable to avoid the onslaught of memes, posts and articles about the character people are calling Baby Yoda—a child of whatever species Yoda was. The internet loves him, my daughter “awwws” when he comes on screen and Disney is spinning up the merch making machine to fire out whatever they can in time for Christmas. He’s the cutest puppet since Gizmo. Because he’s just a shaved Gizmo. Jon Favreau took one of the cutest pop culture icons ever and ran it through an epilator.

Look at him; big ears, big eyes, an upturned mouth, coos instead of talks, three fingers and always in a bassinet, box or oversized clothes so we don’t see the hand shoved up his rear. I’m not criticizing. Far from it. I think it’s brilliant! If I could figure out a way to wax a Mogwai and resell it to everyone, I would do it in a heartbeat.

On a totally unrelated note, I’m happy to announce that my first book in the Duck and Cover Adventures, Post-Apocalyptic Nomadic Warriors, is now available in hardback for the first time ever. 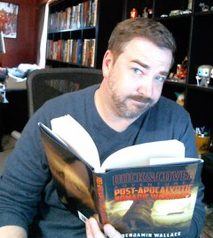 If you enjoyed it as an e-book, paperback or audiobook, you’ll love it in this slightly stiffer version. It also makes for a great gift because, for as much as I love them, it’s a pain to put a bow on an e-book.

Side note: For those that have inquired, I will be making signed copies available to those who want them through my website. But with printing and shipping I have no idea of what delivery dates will be. I’ll update everyone when I know more.