I was a teenage Jedi 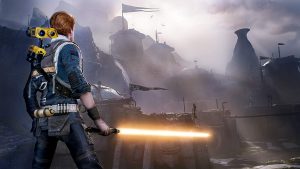 I just finished Star Wars Jedi Fallen Order where you play as Cal Kestis. He was a young padawan when Order 66 occurred. He has been hiding from the Empire’s Purge Troops for five years by keeping the same weird shaggy hair cut every padawan had in the movies. It’s called hiding in plain sight. And it’s been working. But to save a friend, he exposes his force powers and the hunt is on. 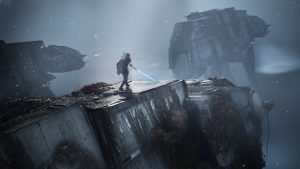 Climbing on AT-ATs to save Wookies. Classic.

I’ve been looking forward to playing this game for a while. I enjoyed the Knight of the Old Republic and Force Unleashed Games and I’ll have to admit that the premise sounded cool. I’m more of a first-generation Star Wars fan. I haven’t really dug into the cartoons or much of the extra lore around the prequels but the idea of a Jedi pursuing good while ducking the bad guys sounded fun. Like the A-Team with lightsabers. 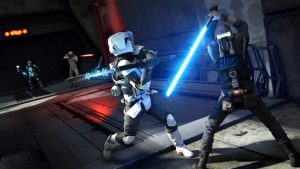 The voice acting is great and the banter of the stormtroopers is enjoyable. It’s not quite Mandalorian level banter but there are some decent lines when they find themselves the last one standing. 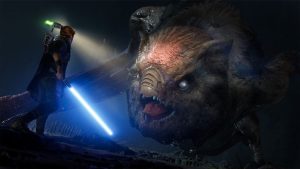 The gameplay delivers. I got to fight beasts, deflect blaster bolts and even take on a giant bat that earned many middle fingers, but they were Jedi middle fingers. 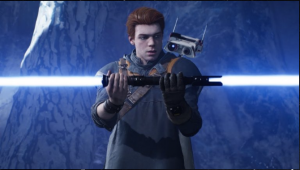 It’s more like a Swiss army knife by the end.

You learn more force powers and your lightsaber evolves as the game goes on. You can push things, pull things, slow things and each skill lets you access more of the map.

It was a fun and the story was enjoyable. It even dove tails nicely into Rogue One a bit.

In the end, I didn’t swear too much, but my understanding is that the higher difficulties are brutal and probably lead to interesting curse combinations.

Now it’s on to Outerworlds.