This nap brought to you by the Shaw Brothers

One thing I’ve missed since cutting the cable was crappy Sunday afternoon movies. Netflix and the other streaming services are full of crappy movies, sure, but not high quality crappy that rises to the standard of UHF broadcast filled with carpet cleaning offers and ITT Tech ads.  Until now. The last month or so, Netflix has been offering up some Shaw Brothers movies like The 36th Chamber of Shaolin—which featured one of the cinema’s earliest training montages. 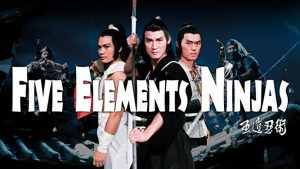 These movies are perfect movies for napping to or to have on in the background while you’re not watching them. This weekend I put on Five Elements Ninjas and I was almost asleep when I realized that I had seen it before.

You see, those darn Japanese Ninjas kept coming over to China and causing problems. And the warriors tried to use their KungFu against them, but the ninjas had the power of the five elements and kept killing everyone by hiding in the trees. Not in the branches. Literally in the trees. 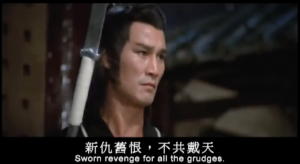 Once a ton of Chinese Kung Fu warriors die at the hands of each element, our hero figures how to combat and defeat the different ninjas. Four warriors then set out for all the revenges.

The guy on the left would have made a terrible Spartan.

The secret lies in an overly complicated axe that transforms into different weapons. It was once they made the first transformation that I started to think I’d seen the movie 30 or more years before. My nap was ruined and I was all in. 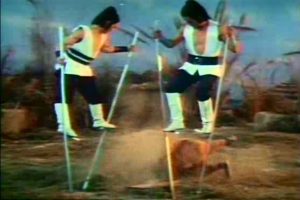 Stabby Stilts. From the makers of the Garden Weasel.

I wouldn’t know for sure when they fought the dirt ninjas. (Not what they called them in the movie.) But, once they broke their staffs into stabby stilts so they could kill the ninja that hid under the ground, I knew it was the same movie I took a nap to 35 years earlier. Ah, nostalgia. 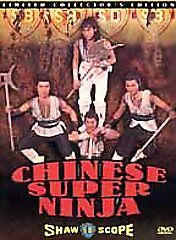 However, when I saw it, the movie was called Chinese Super Ninja and I’m not sure which name I like better. It’s important to note that the Chinese were not the ninjas. And the whole plot was that it was the Japanese Ninjas causing all the problems. So Chinese Super Ninja makes no sense at all. So I think that’s the name I like better. No matter what you all it, it was terrible, you should watch hit.